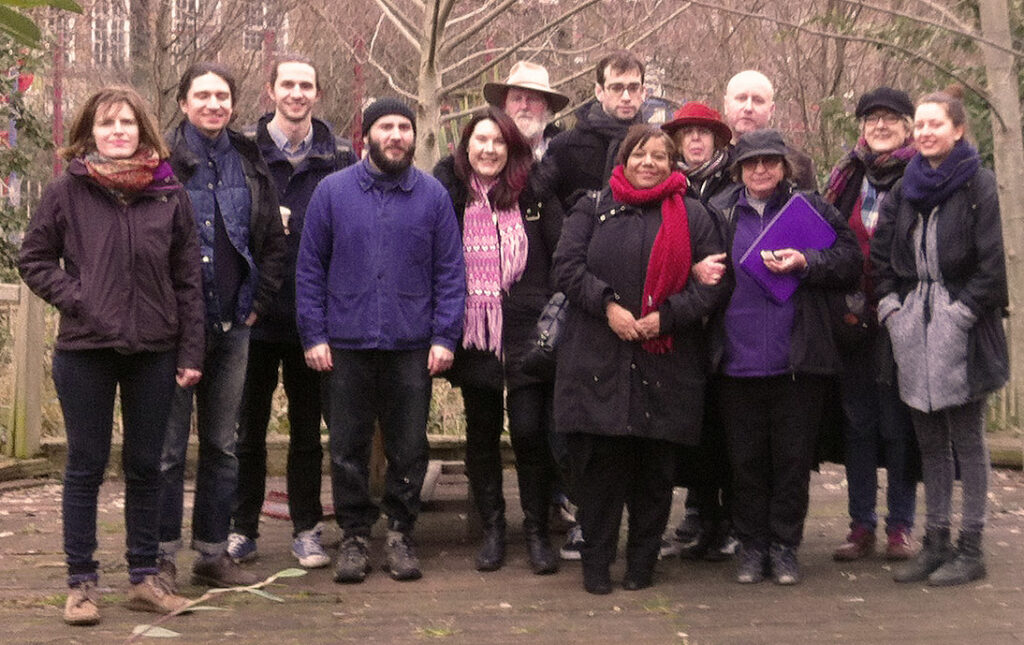 In early 2015, DNA grew out of Old Tidemill Garden Friends group: volunteers and community activists who were concerned about future plans to obliterate Tidemill Garden. The garden was a unique community garden which had been created by parents and children of the Old School along with local residents some two decades previously.

Additionally, the group knew that there were other local residents near the Garden who would like to have more say about planning decisions – so the idea of setting up a Neighbourhood Forum began.

Locality, the organisation responsible for enabling communities to set up Neighbourhood Forums under the Locality Act 2011, provided DNA with a consultant, Angela Koch who helped guide and support our initial consultations to establish an agreed boundary for the Neighbourhood Forum Area, constitution and objectives.

The aim of DNA is to encourage, empower and enable local residents, businesses, and workers (both paid and voluntary) as possible to write a Neighbourhood Plan.

Following a six-week consultation by the London Borough of Lewisham which took place in the autumn of 2015, DNA gained Designation from the Mayor of Lewisham in Early February 2016. A Neighbourhood Plan sits under the Lewisham Local Plan, the London Plan and the National Planning Policy Framework.

In 2016, DNA used funding from Locality to put on consultation events at the Armada Centre, Evelyn Community Centre, and co-hosted a Vietnamese Cultural event at CAC 2000 and held its Inaugural General Meeting (IAGM) in October and established 5 working groups to develop policies in November:

In 2017, the working groups worked on the views gathered from the consultant events to create Neighbourhood Planning policy ideas. We were supported by evidence gathering by UCL students in 2016 and 2017.

Draft policy ideas were circulated and Angela Koch to began to create the first draft of Deptford’s Neighbourhood Plan. This was put up in Deptford Lounge at the time of our AGM in October 2017.

DNA is run by volunteers, of which more are needed to complete the Neighbourhood Plan.

Once complete, London Borough of Lewisham will again consult local residents on it and then it is to go to a local referendum before being passed.

What is a Neighbourhood Plan?

Neighbourhood Plan policies cannot block development that is already an adopted part of the Local or London Plan.
It can shape development, designate sites, protect local green spaces, support local employment and address many more planning matters in greater detail than it is possible for a Local Plan and the London Plan to do.

Andrea grew up in Tottenham in the fifties and was a teenager through the sixties, when it was invented. She has always followed her interest in how the community shapes and responds to individuals.

As a clinical psychologist, she worked first of all in a psychiatric institution in Wales (horrid) and later on a community team in Lewisham and Greenwich. Our main focus was being part of the closure of hospitals and the new ventures of integrating people who’d been shut away for decades.

30 years ago she was instrumental in founding Entelechy, based at the Albany, which has always promoted arts and a sense of belonging to disadvantaged people.

After retirement from the NHS, Andrea has continued to pursue her ideals about society becoming more equitable and welcoming of difference at Time Bank in Lee Green, various political activities (with a small ‘p’) and a love of working as volunteer in Lewisham’s green spaces, all point to her valuing people, and places without the need for any exchange.

Andrea's background is in providing independent advocacy to asylum seekers & refugees; disabled people, older people and looked after children. She has worked for Local Authorities; the British Red Cross and a Community Legal Advice Centre. She currently Coordinate Deptford Nighbourhood Forum. She is a strong supporter of the Human Rights Act & Children and Young People’s Rights under the UN Convention of the Rights of the Child.

As an activist & campaigner, she has spoken publically on a wide range of issues – particulary:

Using Neighbourhood Forums to obtain social justice in relation to planning (especially maintaining and increasing access to open green space and play spaces for young people.  I am a campaigner for more Council Housing; Keep(ing)Our NHS Public; Stop TTIP; & Remaining in the EU.

I love volunteering in Deptford in this role within DNA and working as part of the DNA team – especially working alongside Malcolm Cadman, speaking with independent local businesses on creating the policies for the Local Economy.

Luciana Duailibe is an artist educator and community leader. She is Chair of WE Women – Women Empowering Women; Chair of Co-oPepys – Community Arts Project and Treasure of DNA – Deptford Neighbourhood Action. She has been creating and delivering community projects since she arrives in Deptford in 2005. She also helps with the managing and running of Pepys Resource Centre – Old Library.

Mireille is a French licensed architect, lecturer and researcher in urban design, urban ecology and sustainability (University of Westminster).

Mireille has been working in several countries on different aspects of neighbourhood’s urbanity, landscape and the notion of public realm.

Having been involved in grassroots activities in Japan and more recently in London, Mireille is very much interested in the participatory process of building a neighbourhood plan in such a challenging place.

Marion has been acting as an Advisor to the DNA steering group on Child Friendly policies for the Neighbourhood Plan.

Through the Alliance for Childhood, she has been working with the GLA, holding meetings at City Hall to make representations to the Mayor and GLA members to help London to become a Child Friendly City.

Malcolm is acting as an advisor to the DNA Steering Committee. A local resident, who set up Voice4Deptford to empower and enable the local community to have more of a say in the development of Convoys Wharf.  He is well known and respected for community work across Deptford through Pepys Community Forum and for setting up training and work programmes.

Malcolm has been working with Andrea Carey Fuller on the Local Economy Policies for DNA.