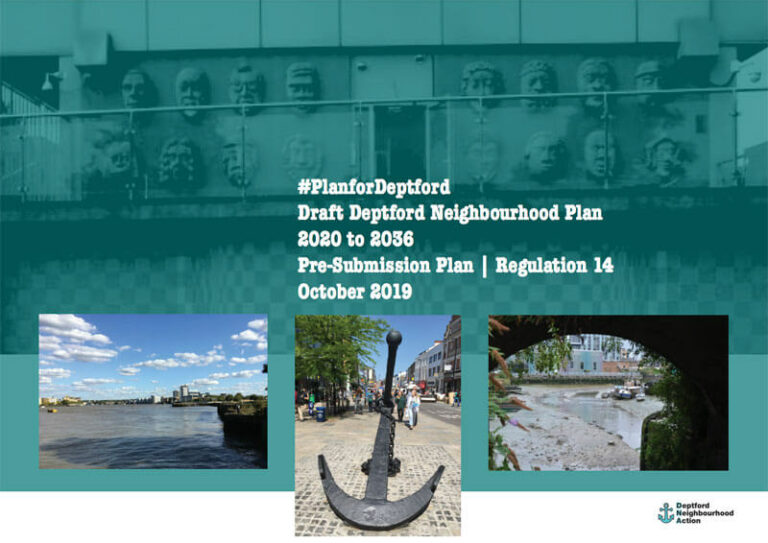 The following working groups were created as an outcome of the Inaugural Annual General Meeting (IAGM), Saturday 10th September 2016:

Each working group met and collaborated with other volunteers to produce this first draft.

Endorsement of Lewisham Biodiversity Partnership’s: ‘A Natural Renaissance for Lewisham 2015-2020’

Protection of the environment to ensure that people living and working in Lewisham can enjoy a clean and green environment thereby actively improving maintaining their health, well-being. Read more.

Minimising the loss of open space, garden land and no loss at all of sites of sites of importance for nature conservation are some of the aims outlined in this document. Read more.

The brief has been refined to reflect the opinions after consultations with the community and groups active in the area in November 2018.

Convoys Wharf – make sure you get your voice heard!

have undertaken immense work to produce a summary of people’s comments on Plot 08 the first proposed apartment building on Convoys Wharf. They have made it easy for people to make objections to this first phase building which the owners Hutchinson Whampoa propose to have NO SOCIAL HOUSING and a podium garden for residents only!

It will block the Site Line for the local community from Deptford High Street to the River Thames. Plot 22 is a proposed marketing suite  accessible by river for rich clients!

Heritage is inherited from the past, re-imagined and refashioned in the present and bequeathed to the future.

PROMOTE and PROTECT all forms of Deptford Heritage and Identities and
PROMOTE and DEVELOP places for all creative communities to flourish.

Emphasising the nature of heritage. A shared community stewardship of the things that have been handed down to us from the past as well as the things we hope to pass onto the future.

Encourage diversity of heritages and cultures. All positive expressions of heritage and identity are welcome in the Deptford neighbourhood.

Support all expressions of heritage and culture that sustain the identity of the neighbourhood's past, present and future.

Establish a Deptford Heritage Hub open and accessible to all, aimed at protecting and enhancing the neighbourhood's special character and historical integrity. The hub's role should include the following:

Landscape character assessment is a process used to describe and articulate what is special and distinctive about a particular place by identifying recognisable patterns of elements or characteristics that make one landscape different from another.

This report presents a summary of the history and character of Deptford within the borough of Lewisham. It has been prepared by consultants at AECOM on behalf of Locality, working closely with the Deptford Neighbourhood Action Neighbourhood Forum (DNA) and is based on a detailed appraisal of the area carried out through desk study and fieldwork.

Development is required to respect and enhance the character and identities of Designated and Non-designated Heritage Assets: visible, hidden or lost, in the town, land and riverscapes of Deptford, both above and below ground/water level.
Applicants are expected to demonstrate in their design approach:

Available information on for instance ‘Listed Buildings and Structures’, Area Character Assessment studies, Conservation Area Character Appraisals, Building Height Strategies, Design Codes, Masterplans as well as site history and archaeological investigations are expected to be absorbed, further detailed, expressed and reflected upon in the design approach and design of the development.

Development is expected to demonstrate and detail this in the required Design and Access Statement, Heritage Statement and other required documentation as defined by the Local Information Requirements 2016 and future updates. Development that engages with local makers, arts and cultural institutions and artists in this work is supported.

Development is required to enhance and financially contribute to the enhancement of public spaces and public realm including the river frontages while positively reflecting on the heritage, the character and the cultural identities of Deptford. Public spaces and realm are considered to be those parts of an urban area (whether publicly- or privately-owned) located between, surrounding and within buildings that are publicly accessible, including streets, quays, squares, forecourts and open and water spaces. The public realm is an important aspect of any development and ensures that the development is integrated into and enhances the existing character and use of the area. Signage informing about the identity of the ancient and historic town of Deptford is one simple example in this regard. DNA further strongly supports the re-positioning of the ‘High Street anchor’ in the high street and the Deptford Dockyard clocktower (currently in Thamesmead) in or very near its original position.

LH 3: DNA promotes the establishment of a Deptford Heritage Hub highly accessibly and located near or on the River Thames (CIL-Priority)

The Heritage Hub must contribute to the enhancement, preservation and protection of special, local character of Deptford in all its features, including architecture, heritage artefacts, and the town and waterscapes (both above and below ground). The Hub must recognise and celebrate past and current life on the tidal River Thames, the changing nature of residential neighbourhoods, centres of trade, industry, culture and where possible supporting the sensitive restoration of heritage assets. This may include a local history centre and archive open to the public. Given the national significance of Deptford and its proximity to major tourism attractions in walking distance (Greenwich) positive impacts can be amplified through locating the Deptford Heritage Hub where it all began: Near or on the river Thames.

Earl Sluice continues parallel with Plough Way to the pumping station in Chilton Grove. It would have emerged into the Thames slightly down river of the South Dock entrance near George’s Stairs.
Read More >>

PROTECT and MAXIMISE the amount and quality of green, open and public spaces in the promotion of a healthier environment.

IMPROVE the health of the local community.

PROMOTE the safety for pedestrians and cyclists.

HE 5: A Network of Public Health and Well Being Clubs (CIL-Priority)

Co-locating health services in existing and extended community facilities such as adjacent to green and water spaces and outdoor sports facilities is strongly supported.
Major development is required to financially contribute to such a health hub infrastructure network. Health services are to be provided in walking distance and shall include early intervention, mental health and holistic approaches to well-being reducing inequality in health by being accessible to all local residents, including migrants, refugees, ethnic minorities and our homeless people.

Major development (10+ homes and/or of 0.1 ha other uses) is required to demonstrate how the needs of older people, particularly living in single households, single parents and young adults from a range of cultural backgrounds are met within the proposed development. DNA strongly supports for instances social care cooperatives, homes that enable a range of supported living options, overlooked and sunny play courtyards, co-working/learning incubator space for micro businesses and studio space for creatives that provide childcare facilities.

The DNA Plan strongly supports improvements to the provision for walking, cycling and pubic transport including water-based transport working collaboratively with providers such as Sustrans.

HE 8: Health and Wellbeing Survey (CIL-Priority)

Financial contributions from development are sought to conduct an annual survey of health & wellbeing in Deptford so that resources can be effectively distributed and monitored in their impact. DNA envisages that Lewisham Council Public Health Department is conducting this annual survey and publishes the results shortly after.

Development achieving the low energy ‘PassivHaus Standard’ is strongly supported. Once a building and its services have been designed to make sure energy consumption will be as low as possible and the use of energy efficient sources has been considered, it is expected that major development achieves a reduction in carbon dioxide emissions through at least 20% on-site renewable energy generation (which can include sources of site-related decentralised renewable energy) unless it can be demonstrated that such provision is not feasible.

The DNA Plan strongly supports measures by the Mayor of London, the Greater London Authority, Transport for London, Network Rail, Lewisham Borough Council, businesses, organisations and individuals that lead to the reduction of vehicle emissions through used fuel quality, vehicle emission reduction technologies and number of vehicles passing through our neighbourhood. This particularly applies during periods of high levels of pollution as defined by London Air.org (level 7 to 9) and the World Health Organisation and along highly polluted road corridors such as Evelyn Street/ Creek Road, Deptford Church Street and New Cross. The closure of the the latter streets for HGV and diesel cars on high pollution days is encouraged as is “no idling” signs at Deptford Bridge bus stop and turnaround, as well as at drop off and delivery locations on Deptford High Street and around schools.

INCREASE the provision of quality social and affordable housing for local people on low and middle incomes and
IMPROVE the health of the local community and
ENCOURAGE community cohesion and active citizenship.

PROMOTE and DEVELOP places for all creative communities
to flourish.

The motion to incorporate the Values of the Economy for the Common Good into DNA constitution was passed at the Deptford Neighbourhood Action Inaugural General Meeting 2016.

Endorsement of Lewisham Biodiversity Partnership’s: ‘A Natural Renaissance for Lewisham 2015-2020’

Protection of the environment to ensure that people living and working in Lewisham can enjoy a clean and green environment thereby actively improving maintaining their health, well-being. Read more.

Minimising the loss of open space, garden land and no loss at all of sites of sites of importance for nature conservation are some of the aims outlined in this document. Read more.

The brief has been refined to reflect the opinions after consultations with the community and groups active in the area in November 2018.

Towards the Child Friendly City

Conference on Child Friendly Cities in Bristol in November.
27 -29 November 2019

To see the  linked to the previous London Plan with the results for Plots 08 and 15 in Convoys Wharf the updated ‘child yield’ calculator for the GLA and archive of previous versions can be viewed here.

Marion Briggs from Alliance for Childhood